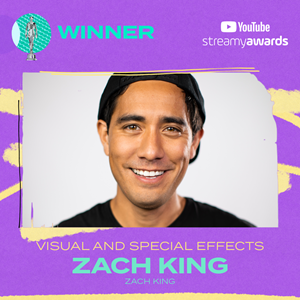 LOS ANGELES, Jan. 12, 2022 (GLOBE NEWSWIRE) — Zach King, the famous online creator best known for his viral magic short videos, is on a winning streak, gradually becoming one of the top digital artists in the world. . According to King Studio, Zach won a Streamy Award for Best Visual and Special Effects (although he prefers to call it “digital sleight of hand”). The Streamy Awards are an annual event dedicated to recognizing excellence in online video and honoring the creators behind it. This is Zach’s third Streamy, winning his first in 2015.

Since bursting onto the TikTok scene in 2016, Zach has captivated an audience of over 66 million followers, making him the fifth most followed creator on the app. In fact, he has created four of the five most viewed TikTok videos of all time. These four videos alone have racked up 4.9 billion views. In a recent reaction video, Zach received praise from YouTube giant Mr. Beast (Jimmy Donaldson), who remarked that Zach was dominating the top spots on the list. “Nothing gets a billion views unless it’s high-quality content,” he commented. So what does that say about Zach’s best video, which has a record 2.2 billion views? Talk about hypnosis!

In perhaps his most exciting win of the year, Zach took a close victory in Mr. Beast’s Creator Games, winning the coveted $1 million cash prize. Other competitors included some of the biggest names on the internet, such as Logan Paul, Bella Poarch and Mark Rober. As a condition of winning the prize, Zach agreed to donate all of the prize money to charity and a few lucky fans. Zach and Mr. Beast will collaborate to donate the money in an upcoming video, bringing real life magic to his fans.

With increasing exposure outside of the social media world, Zach has collaborated with some of the biggest stars in entertainment. Most recently, Zach appeared on an episode of the hit Disney+ show, The world according to Jeff Goldblum. In the Season 2 episode titled Magic, Goldblum visits Zach in his studio and peeks behind the curtain to see how Zach brings his magical ideas to life. They even make a short video together which Zach later posted to his Instagram account, garnering over 11 million views.

Zach’s success isn’t all smoke and mirrors. Although his methods may be a mystery, his accomplishments are not an illusion. His fans are cheering him on, waiting to see what other tricks Zach has up his sleeve.

This content was posted through the press release distribution service on Newswire.com.

The Afghan people are starving; turning your back on them is morally reprehensible | Gordon brown