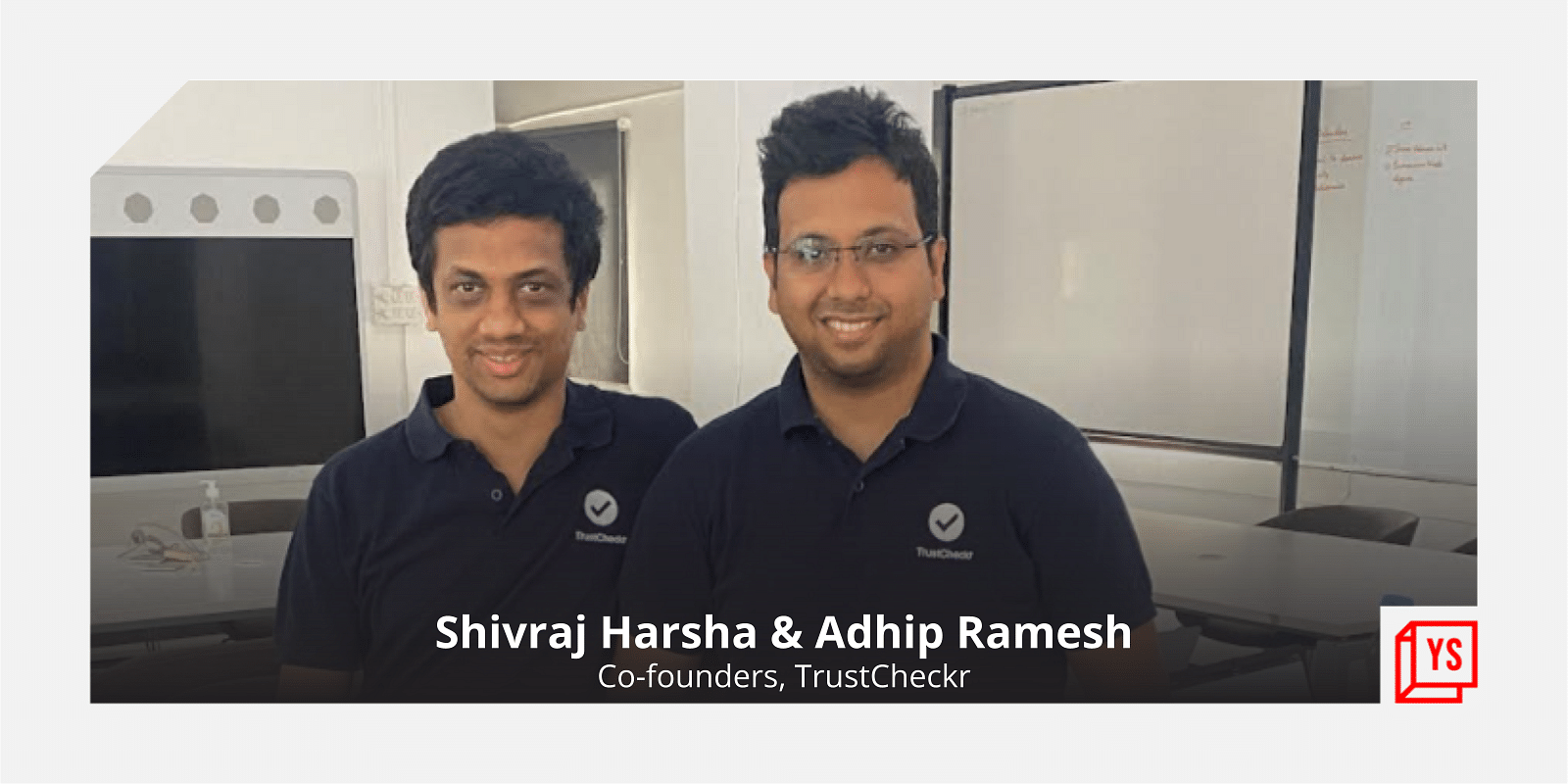 Digital transactions It may have made our lives easier, but how many of us are savvy enough to spot identity theft?

Synthetic identity theft is the fastest growing cybercrime in the world. This happens when criminals fabricate fraudulent identities to establish new accounts or lines of credit. Synthetics are difficult to detect, expensive and often misclassified.

bangalore-based TrustChecklaunched by colleagues Adip Ramesh and Chivraj Harsha in 2017, aims to solve this problem. An AI-enabled tool that helps identify and remove fake users, the startup has a proprietary algorithm tested on over a million data points and used in AI and ML in benchmarking. pictures.

“During the onboarding phase in all B2C/fintech companies, many fake/fraud profiles are created with synthetic phone numbers and email addresses with the aim of scamming/frauding the systems. This affects all industries including fintech, banking, crypto, dating, marketplaces, classifieds, and more,” Adhip Ramesh, co-founder of TrustCheckr says in a conversation with YourStory.

“This issue was causing – loss of user tracking via call centers, SMS, emails, etc. unnecessary underwriting fees; inefficient use of marketing spend; and the challenges of creating a community of trust,” he adds. To overcome these issues, the Adhip startup assigns a trust score to the user based on phone number, Facebook ID or email ID. The company has already performed more than 10 million “TrustChecks” so far on seven clients.

While TrustCheckr’s solution can serve businesses across all industries, including fintech, dating and e-commerce, it provides a cross-industry fraud intelligence platform for BFSI (banking, financial services and insurance) in particular.

Since TrustCheckr performs social analysis for over 1000 keywords and processes, it processes 50 million tweets to fetch the data and extract social media fraud sentiments.

The startup claims to provide simple REST APIs like Phone Risk API, Email Risk API, UPI Risk API, IP Address Risk API, and Social Media Negative List. Representative State Transfer (REST) ​​is a style of software architecture that was created to guide the design and development of the architecture of the World Wide Web. REST defines a set of constraints on how the architecture of an Internet-scale distributed hypermedia system, such as the Web, should behave.

Along with this, the startup is also to launch the “TrustCheckr Alerts” platform to help fintechs, banks, credit bureaus and NBFCs receive early warning signals about online scammers.

“As the nature of the data we work with is complementary, we suggest all our clients to first use our product (pre-KYC checks) and then optimize the full funnel of client onboarding,” says -he.

Alumnus of IIM Lucknow, Adhip has worked with companies like Simplilearn, KPMG, ATK and NetApp. Shivraj is an alumnus of the University of Liverpool, UK and previously worked at I-Tiffin in addition to RedSeer.

TrustChkr currently has a team of 10 full-time employees and a few interns.

The startup was initially seeded with Rs 10 lakh, before raising Rs 45 lakh in an angel round from Rangsons LLP (investment arm of NR Group) in 2018.

In March 2022, the company secured Rs 6 crore from the IIFL Fintech Fund startup fund, with participation from Rangsons LLP as well.

“Our monetization model is pay per API call. We offer two payment models. The first is the prepaid model, which is more suitable for small businesses where they buy 25,000 API calls in advance and can consume them in depending on their growth. The prepaid package starts with a minimum billing of Rs 1 lakh. In the second model, the startup enters into an annual contract of around $25,000 with an established NBFC,” says Adhip.

The startup has delivered over 10 million API calls to date.

“Our MRR is around Rs 13.5 lakh to Rs 15 lakh. We expect to close the fiscal year 21-22 with revenue of Rs 1.5 crore. We are able to break even with the current revenue stream. In the current fiscal year, we expect to double revenue,” says Adhip.

The startup’s journey has not been without its challenges. For client validation and subscription, the startup only had the combined desktop-centric Aadhar normative framework to resort to, which had its own set of drawbacks.

“While this framework ensured frictionless validation of the KYC process, it had its limitations, as it did not take into account a user’s digital ID. Which essentially meant that companies did not know if the digital ID and physical ID (Aadhar details) belonged to the same person.This left major flaws in his fraud prevention armor,” says Adhip.

“Our product was essentially a paradigm shift, therefore, we had to educate our customers at the beginning. However, with the onset of the COVID-19 pandemic, there was a sudden increase in the number of fraud cases. businesses are now willing to invest in products that complement their existing systems,” he comments.

According to industry analyst firm Aite Group, the cost of synthetic identity fraud is expected to reach $2.4 billion by 2023.

Although TrustCheckr’s product is industry and geography agnostic, Adhip says, “Our current geographic focus is in India. We started with the fintech sector, now we are looking to expand into the rental economy. Most of our established NBFC clients are located in Mumbai or Delhi. Our new age fintech customers are in Bengaluru,” he adds.

The startup competes with Socure, Seon.io, Fraud.net, and Threatmetrix, among others.

With an active pipeline of over 50 clients including IIFL, Piramal, Snapmint, the startup will continue its push into the fintech sector.

“What we have explored now is just the tip of the iceberg. With the predicted explosion of credit growth in the coming years, a product like ours will allow businesses to focus on their core lending business, leaving it to us to protect them from fraudsters,” says Adhip.

“In terms of expansion, we will continue to invest heavily in technology talent. In the coming weeks, we are looking to hire 15 technical resources with a mix of full stack developers and data scientists. Our recent fundraising will give a track for 15 to 18 months. We want to do 100 million TrustChecks a year over the next two years,” concludes Adhip.