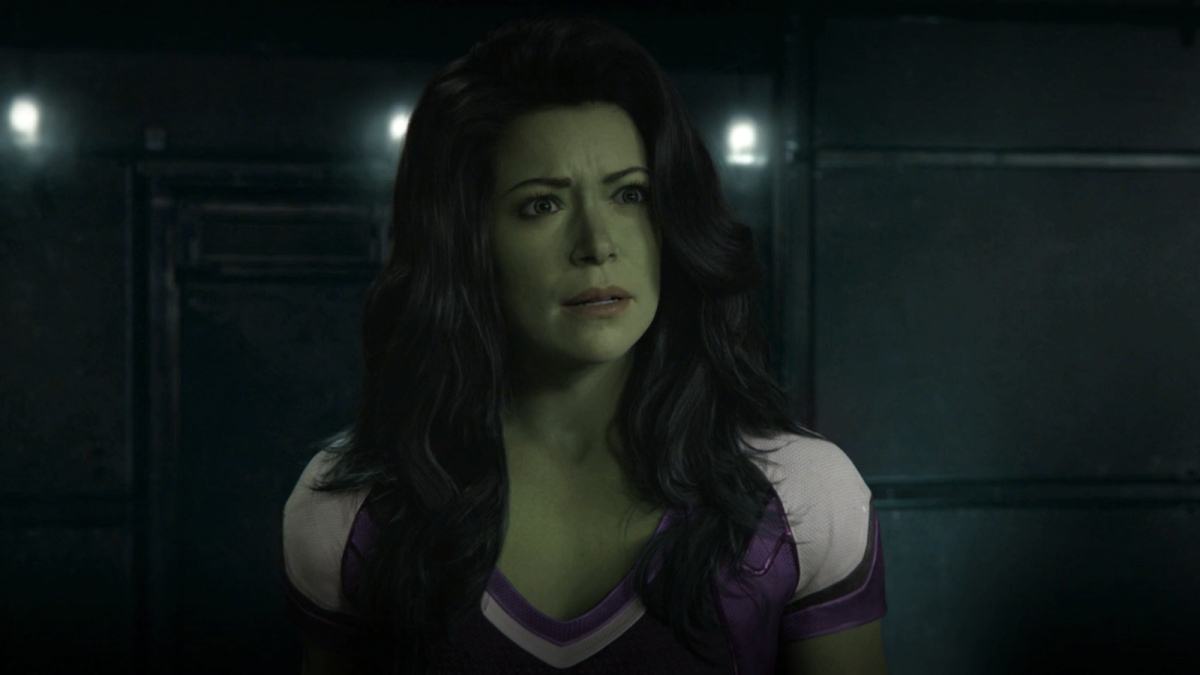 SPOILER ALERT: Don’t read if you haven’t watched the season finale of “She-Hulk: Attorney at Law,” now streaming on Disney+.

Throughout “She-Hulk: Attorney at Law,” Jennifer Walters, aka She-Hulk (Tatiana Maslany), repeatedly breaks the fourth wall by not only addressing the camera directly, but acknowledging that she exists in a Marvel Studios superhero TV show. In the season finale – ostensibly titled “Whose Show Is This?” – Jennifer walks out of the show completely, jumping through the Disney+ portal to confront the show’s writers on why the finale is so unnecessarily convoluted with superfluous and absurd storylines, including one about a cabal of toxic fanboys hanging around Jennifer online about being a superhero who doesn’t deserve her powers.

As Maslany, creator and head writer Jessica Gao, and director and executive producer Kat Coiro explained to Variety, Feige was in the gag from the start and even helped shape his AI avatar. They also talked about the satisfaction they felt watching real-life online trolls use the exact same criticisms of “She-Hulk,” the show, that the show’s fictional online trolls used against She-Hulk, the character. And Maslany touched on Jennifer’s romance with fellow attorney Matt Murdock, aka Daredevil (Charlie Cox), while Gao and Coiro shed some light on the introduction of Jennifer’s cousin’s surprise son Skaar (Wil Deusner). Bruce Banner, aka Hulk (Mark Ruffalo).

In addition to breaking the fourth wall, the finale addresses some of the same trolling comments that Marvel fans have made. How did you feel watching this happen while the show aired, knowing how the finale would play out?

Tatiana Maslany: Jessica Gao is a genius and knows the culture we live in and where she stands when she writes these superhero stories. She knows what that answer will be. As a cast, it was delightful to send each other these troll replies, like, “Oh my god, give them a week and then they’ll literally see this verbatim pop-up on the show and become the villains of the show .” It was passionate.

Did you expect to face the trolls when you signed on for the show?

Reading the script, it was so true. There is so much resistance to a woman that only exists in this superhero space. There will always be that. I kind of anticipated it. That’s why I also think it’s important. There’s such a right to space held by some people, and even existing as She-Hulk is like a fuck-you, and I love it.

What are you hoping to see from Jen and Matt Murdock’s relationship?

I don’t know what Jen’s life is like now, other than opening up. They certainly have a very real connection. I’m curious how this manifests, whether it’s getting together once in a while and having fun, or if it turns into something more. But I don’t think any of them are thinking about that. They are at the start of something.

Which Avenger would Jen get along best with?

Baby Groot would be such a great day. Can’t film unless it’s put on my head or something. There are so many characters that would be fun to see how Jen and them get along because she’s a bit weird and a bit of an outsider. I think any couple would be interesting.

She and Deadpool would destroy the fourth wall.

They will fight over which camera is the dominant camera.

Did Marvel give you any suggestions for the hateful comments they receive online?

Jessica Gao: This conversation between Jen and KEVIN is a lot of the relationship I have with Kevin in real life and a lot of that is drawn from conversations I’ve had with him. This scene was so much longer in the scripts. If they had let me, I probably would have written a 10 minute conversation of my avatar arguing with Kevin. It’s probably the tightest version of what it could have been. There were a few shots where Kevin said, “OK, that’s kinda mean now.”

How did it feel to accurately predict what the trolls would say?

Our Writers’ Room opened three years ago. The fact that we were able to predict what the reaction was going to be, what a lot of the troll comments were going to be, really shows how tired and unoriginal these trolls are. This really tickled me because the little troll that lives inside of me really likes trolling trolls.

How did you decide to present Skaar?

Early on, we often talked about whether there would be a cameo at the end or, in typical Marvel fashion, teasing a new character at the very end. A big appearance would depend entirely on who was available and who was willing to make it, and you can’t really count on that at the script stage. We talked a lot about which character we could tease. In the end, it was Kevin who decided it should be Skaar. His look is all Kevin Feige.

In the episode set during the superhero retreat led by Emil Blonsky, aka the Abomination (Tim Roth), you introduced several little-known Marvel characters, like the vampire Saracen. Was it meant to be a Blade reference? Were there other obscure comic book characters you wanted to use?

We were working backwards wanting to make blood jokes. We initially explored a strange and monstrous creature. Originally we wanted to use Varnae, which is a vampire character that’s more like a bat, so we could have a character that’s not fully human and make a lot of jokes about being more animal and want to drink blood. That’s how we ended up with Saracen. There were a lot of characters from the comics that we pulled that we thought were such dark, deep cuts or just silly characters that we thought were really fun to weave into the story. We couldn’t do a lot of them because there was already a plan for them or there was a rights issue with the character. We also tried to play with them and had nothing in terms of story. At one point we had come up with a story for Stilt-Man just because he’s such a silly character, but ultimately we didn’t really come up with a good story to use him.

What was Kevin Feige’s reaction to the final?

Kat Coiro: Kevin played a huge role in this finale and in the character of KEVIN Ironically, I was more disgusted than them. I was like, “Are we going too far? Are we throwing Marvel and fans under the bus by filing Marvel movies? They have such a sense of self-mockery and irreverence towards themselves and were totally willing to make fun of themselves. Any criticism you can throw at them, they’ve thought about it.

Did you have to dig deep for all the Marvel reviews or just scroll through Twitter?

One thing I noticed was that at the start of the series, I was getting a lot of mean and mean comments. As it progressed, it stopped. I think it’s because now they realize that when they target us, they’re playing right into our hands. And we called it, which is kind of gratifying. It’s so satisfying. Even a negative comment, I always interpret it as a commitment. If people are so angry, they’re paying attention. I consider all of this to be positive.

How many of the cameos at the end, like Daredevil, Skaar, Hulk, and Abomination, were just for gags or were they intentionally placed for future storylines?

Kevin was very specific about Skaar, so I’m sure there’s a plan going forward, although I have no idea what that might be. We all knew Daredevil had to come back because people love him and their chemistry is so good. I only wish Patty Guggenheim as Madisynn came back in the finale. It is my great regret.

What reverberations will the finale have in the future of the MCU?

I like it when KEVIN says the problem has been fixed because I don’t want every character in the MCU [be able to] confront him with their intrigues. So I hope it’s only once. We now know that it exists, but I don’t think we have to come back to it all the time.

These interviews have been edited and condensed.

The best of variety