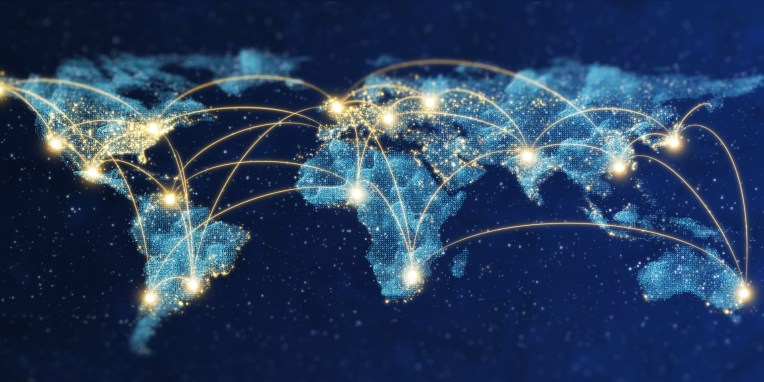 Technology has never agree with the limits. Even the most detailed satellite snapshots of Earth show no boundaries. From print to airplane, phone to social media, advancements in technology have helped us transcend time and space. And when he didn’t send memes out into the world, he sparked revolutions.

We have become accustomed to the subversive capacity of technology, but it has not always been so. Far from crossing borders, technology has most often been used to change them. From ancient Rome and China to the British Empire in the United States, the history of the world can be told as a story in which those who harness technology win.

Until about thirty years ago.

Since the fall of the Berlin Wall, technological progress has been largely separated from politics. Consumer demand, not state affairs, has driven society forward.

This benign neglect has brought us enormous benefits: smartphones, electric cars – the World Wide Web! Can we imagine going through the past 18 months without Zoom, TikTok, or Amazon Prime? But the tone has changed lately. For the first time in living memory, politics is perhaps the most important factor in the future of technology.

This is why we are launching today the TechCrunch Global Business Project.

After decades of near impunity, the world’s tech titans face a rapidly changing political environment. European regulators are tracking tech multinationals on tax, confidentiality and monopoly abuses. Chinese authorities are cutting off the wings of the country’s most powerful companies while restricting their foreign competitors. And in a politically divided America, an antitrust dynamic is one of the few policy areas that has momentum – and bipartisan consensus.

This examination comes as technology companies act more and more like nation states than businesses. Facebook now has a judicial branch; tech moguls have reached orbit, going where only governments have gone before; and cryptocurrencies pose the greatest threat to the monetary power of governments since the invention of money.

Meanwhile, governments are making flexible use of technology for their own ends. Instead of aiding and comforting dissidents, technology is now used to suppress them. The recent controversy over Israeli company NSO Group is just the latest example of dictators deploying sophisticated tools like ransomware to monitor their political opponents (or worse).

Technology may be a tactical tool, but it has become a strategic goal. Since the Soviet-American arms and space races, technology has not been of such geopolitical importance. Huawei is just the most striking example of technological competition as a proxy for geopolitics. From Taiwan to Sweden, from Brussels to Beijing, technological policy and foreign policy are increasingly one and the same.

The truth is that from now on, the fate of states will depend more than ever on the technologies they own. And the fate of tech companies will most often be tied to the states in which they reside. According to experts, who controls the most advanced technology will determine the world order. of the 21st century. And after several decades of free-for-all, the time to choose sides has come for many.

So before we go any further, allow me to introduce myself. I am originally from California, a writer and training policy enthusiast, I have lived in New York and spent time in Washington, London and Paris. I have written speeches, worked for a large foundation, consulted for political campaigns and co-authored a bestselling book. Although my focus is on foreign policy and national security, I have also worked on a wide range of issues; At TechCrunch, I wrote about philanthropy, commerce, 5G, and US-China relations.

Although I occasionally contribute to this series, my main role will be that of curator and editor. We invited some of the world’s foremost experts and practitioners to share their thoughts on the impact of technology on their field. From cyber to drones, from AI to the future of democracy itself, our contributors will introduce you to the latest developments in their field and explain how technology is helping them chart a course for the future. They will connect the dots, so to speak, between bits and bombs, code and COVID, networks and nations.

There are elephants in the room. Competition with China is important, as is cooperation with allies. With COP26 approaching in just over a week, climate change – and the ability of the tech sector to have an impact – is vital. And understanding how the power of technology to strengthen or undermine civic discourse is essential if we are to preserve democracy and protect human rights.

This week, we start with pieces on several topics not always considered in connection with technology. Matt Rogers, co-founder of Nest, writes about the role of startups in tackling climate change. Phil Levy, chief economist at Flexport, explains what China’s “decoupling” would mean for technology supply chains. And Omidyar Network’s Robert Karanja explores the dangers of digital ID – and how it can be implemented securely and fairly.

This series is an experiment, and like the best software, we aim to iterate. Please share your thoughts with us and send us your ideas. Our goal in the coming weeks is to elucidate, to inform and, hopefully, to provoke a little too. I hope you will join us.