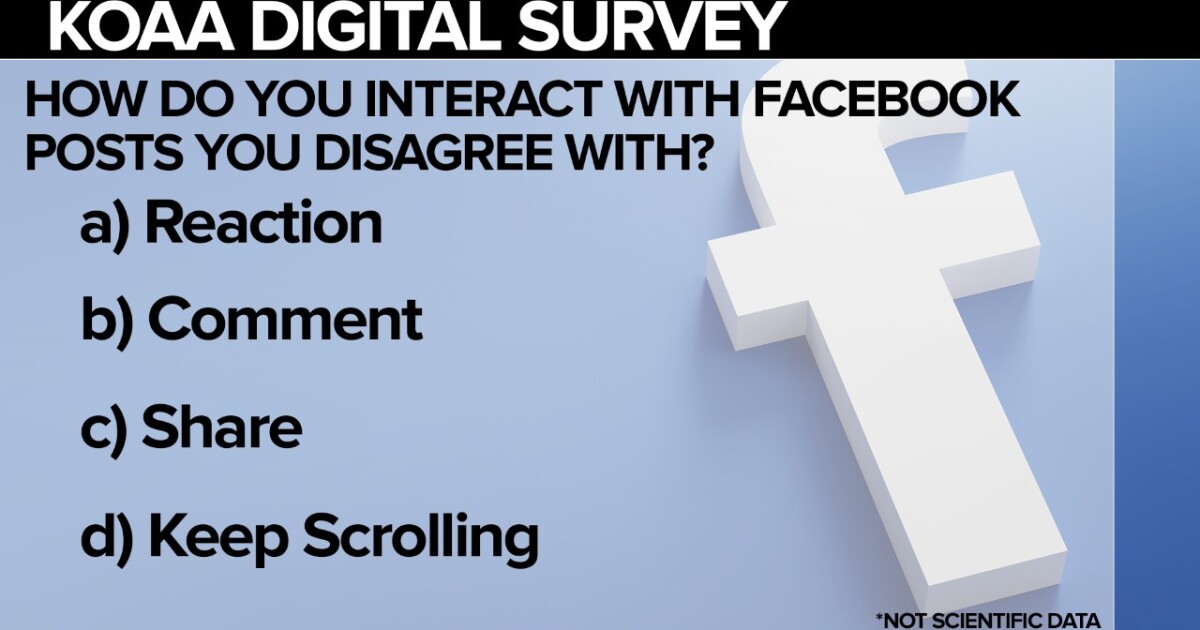 How do you interact with Facebook posts that you disagree with?

SOUTH COLORADO – For today’s KOAA survey, the News5 team wants to know how you interact with posts you disagree with on Facebook.

We are following this investigation throughout the day and until tomorrow. Tune in to News5 at 4 p.m. as we take a look at the results!

Editor’s Note: This survey is not based on representative scientific samples and is intended for KOAA purposes only.

A Facebook whistleblower on Sunday accused the social media company of prioritizing profit over cracking down on hate speech and disinformation.

Frances Haugen, who worked as a product manager in Facebook’s civic disinformation team, said 60 minutes that she was the person who triggered a the Wall Street newspaper investigation of the company. The WSJ posted a series of stories based on internal Facebook presentations and emails that showed the social media company contributed to increased polarization online when it changed its content algorithm. The company was also unsuccessful in tackling vaccine misinformation and was aware that Instagram was damaging the mental health of teenage girls.

Haugen will testify before a Senate subcommittee on Tuesday at a hearing titled “Protecting Kids Online,” about the company’s research into the effects of Instagram on young users.

“There were conflicts of interest between what was good for the public and what was good for Facebook,” she said during the interview. “And Facebook has repeatedly chosen to optimize for its own interests, like making more money.”

Haugen also claimed that Facebook lied to the public about the progressive steps it is taking to end hate speech because it was more focused on the benefits that these conversations and interactions can generate.
___