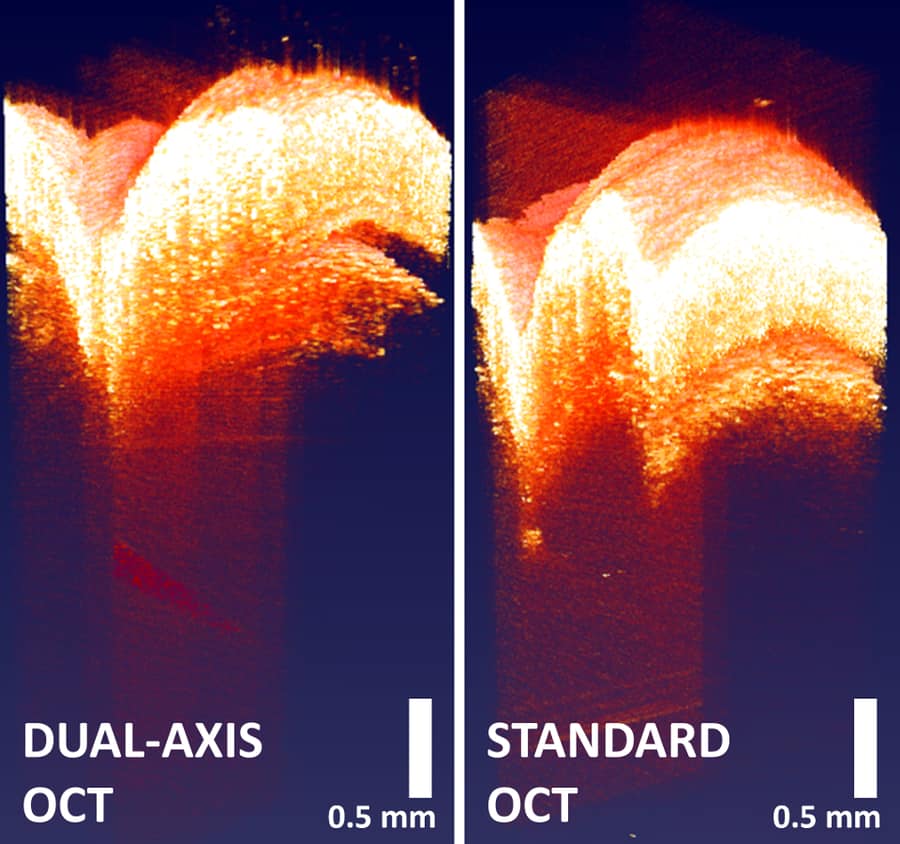 Follow the Ghostbusters: Crossing the Beams Brings Deeper Images Under The Skin

Biomedical engineers at Duke University have demonstrated a method to increase the depth at which optical coherence tomography (OCT) can image structures under the skin.

The gold standard for imaging and diagnosing diseases of the retina, OCT has yet to find widespread use as an imaging technique for other parts of the body due to its inability to return clear images more than a millimeter below the skin’s surface.

Duke researchers found that tilting the light source and detector used in the technique increases OCT imaging depth by almost 50%, putting skin diagnostics at your fingertips. The ‘two-axis’ approach opens up new possibilities for using OCT in applications such as skin cancer screening, assessment of burn damage and healing progress, and guidance of surgical procedures.

“It’s actually a pretty straightforward technique that looks like something out of Ghostbusters – you get more power when you go through the beams,” said Adam Wax, professor of biomedical engineering at Duke. “Being able to use OCT even 2 or 3 millimeters in the skin is extremely useful as there are a lot of biological processes occurring at this depth that can be indicative of diseases like skin cancer.”

Standard OCT is analogous to ultrasound but uses light instead of sound. A beam of light is projected into an object, and by measuring the time it takes for it to bounce, computers can deduce what the internal structure of the object looks like. It has become the technology of choice for imaging and diagnosing diseases of the retina because the retina is so thin and easily accessible through the transparent cornea and lens of the eye.

However, most other biological tissues scatter and reflect light, making it difficult to penetrate with standard OCT approaches. The deeper the light, the more likely it is to get lost in the sample and fail to detect the device.

In the new technique, the researchers instead point the light at the object at a slight angle and set the detector up at an equal and opposite angle, creating a double axis. This allows the detector to benefit from the slight scattering angle introduced by the physical nature of the object.

“By tilting the light source and the detector, you increase your chances of collecting more light that diffuses at odd angles from deep within tissue,” said Evan Jelly, a doctoral student at the Wax lab and first author of the ‘article. “And the OCT is so sensitive that a little more of that scattered light is all you need.”

According to Jelly, the researchers tried this two-axis approach in other imaging modalities. But through his experiences, Jelly found out how to apply this to OCT. His key discovery was that the depth of the focal point of light in the tissue makes a big difference in how the two-axis approach works.

However, there is a catch: the larger the angle used to identify a deeper signal, the smaller the field of view becomes. To work around this problem, Jelly devised a method of scanning the focus of the narrowest window at different depths of the tissue, then using a computational algorithm to combine the data into a single image.

In the article, Wax and Jelly tested this approach with fabricated tissues and hairless mice to compare its performance to standard OCT to see what information it might reveal in the skin of a living animal. Controlled experiments have shown that the two-axis OCT approach tends to outperform the standard configuration. And in live mice, the dual-axis OCT was able to image the tip of a needle 2 millimeters below the skin surface, where 1.2 millimeters is traditionally the depth of the landmark.

“Dual-axis OCT has provided us with images and information from the layers of the skin where blood and molecular exchanges occur, which is extremely valuable for detecting signs of disease,” Jelly said. “The technology is still in its infancy, but it is poised to be very effective for biosensing or guiding surgical procedures. “

How much paper would it take to print the entire Internet? – CVBJ