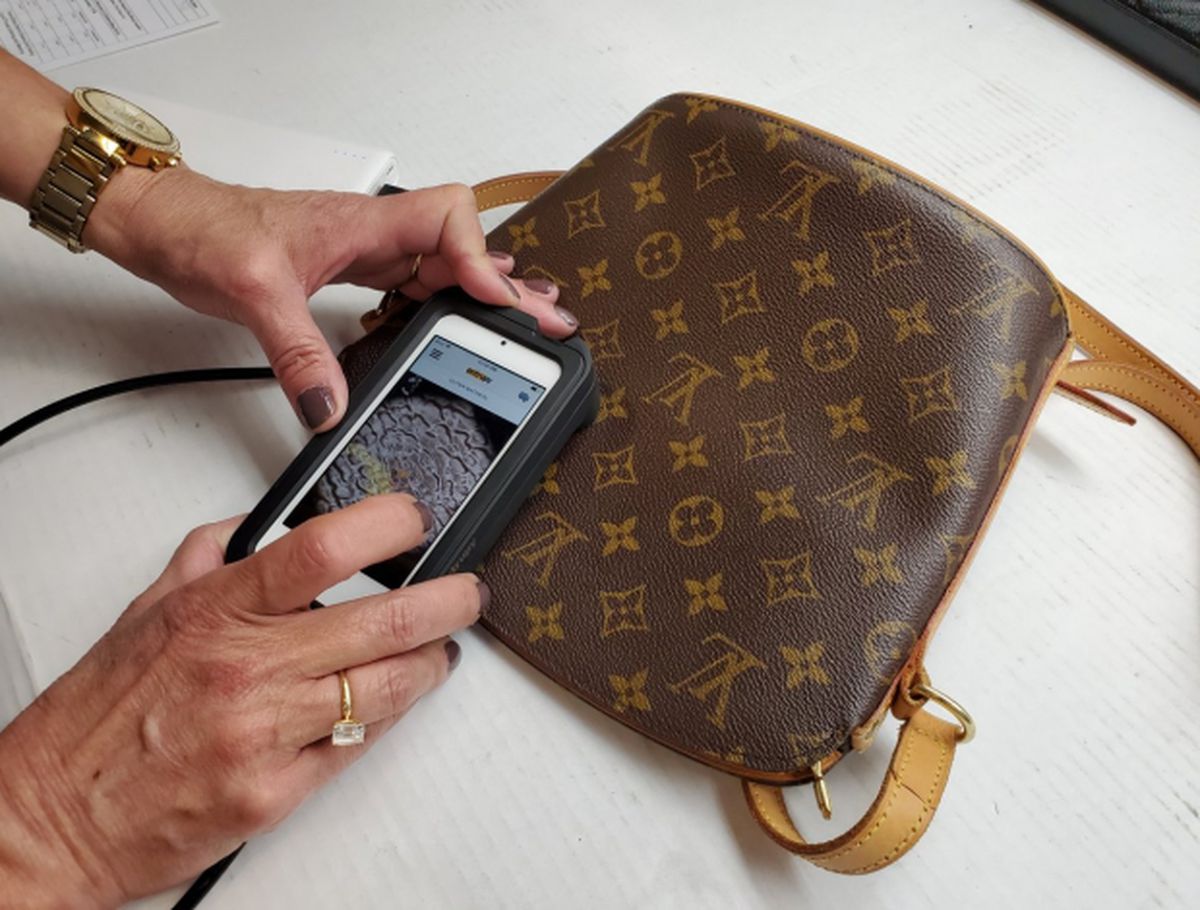 “I’m going to show you a fake bag so you can see how spectacular an imitation can be.” Lucía De La Calle, is an appraiser at second-hand luxury handbag boutique Del Páramo Vintage in Valladolid, northwestern Spain. She shows EL PAÍS a Louis Vuitton Twist MM bag, a classic model that the brand wants to make a basic, betting on its reissue year after year in different colors.

Its cost is €3,500. “I think my eye is quite trained but often even I am unable to see the difference,” says De La Calle.

The woman who bought this bag for €2,500 on the second-hand market brought it to the store with the orange box and the authentic dust cover characteristic of the brand, as well as a copy of the receipt of her old owner.

De La Calle is tasked with making a preliminary assessment which she calls a “sandwich analysis”: looking at the outside, the inside, and then the outside again. In this case, the analysis was easier than usual because there happened to be an original model in store.

“First of all: I put the bag on the table and I pick up the chain, because there are chains and then there are chains. The texture, the solidity, the coldness, the shine… everything tells you something,” she explains. “The second thing is the weight: a good bag is generally not light. Today, the brand’s website gives the exact weight of each bag, but just as we check those numbers, so do counterfeiters. Then you have to look at the details: see if the seams are straight or if there are double threads. Luxury items are always perfect – those with flaws are discarded before they hit the market. This bag was immaculate.

“We open it up and the first thing we look at is the stamp,” explains the evaluator. The stamp “is accompanied by a silver bas-relief exactly the same as that of an original bag – it is accompanied by the small mirror bearing the brand’s signature”. The stamp looks totally authentic, “but then I see the first detail that makes me suspicious.”

Since 1980, Louis Vuitton has included a label with a code. The code has two letters and four numbers that indicate the place and date of manufacture. It is a guarantee for customers, who can consult the code to ensure that their bag was indeed made in France in 2006.

“That bag had the code on it, a good sign,” De La Calle continues, “but instead of being placed in such a way that when I opened the bag I could read it, I had to turn the bag inside out to It’s silly, but counterfeiters overlook that kind of detail.

To top it all off, De La Calle notices that the stamp inside the bag is very close to the seam, whereas it is a few inches lower on the other bag they had in store. De La Calle determines that the woman’s bag was a fake.

“When you tell a customer their bag is fake, they first say ‘it’s impossible’ and then they get angry,” says Sheila Guerrero, co-founder of boutique Del Páramo Vintage. “And I understand, most people who come to our store have paid a minimum of €500 for a bag, usually much more expensive.” Guerrero says that every week at least one bag in the store turns out to be a fake: “The most counterfeit bags are usually Chanel and Louis Vuitton – people go for the classic, timeless bags.”

The fake Louis Vuitton Twist was one such case: the woman who brought it didn’t believe it could be a fake, she even had the receipt. “The problem with the scam is that it is becoming more and more professional: now they sell you bags with invoice, because there are companies that even falsify the invoice of the stores”, explains Guerrero. After all, if someone can forge a bag, how can he not forge a piece of paper. In other situations, “there are those who buy an original bag and then 25 fakes, and they send you the photos and the invoice of the original… but then they send you the fake,” Guerrero explains. For these cases, Del Páramo Vintage has a device that, thanks to artificial intelligence (AI), can detect a fake in record time.

Lucia De La Calle releases an iPod with a built-in device that has a huge lens. The assessor then opens an app called Entrupy and the system begins to guide them through the authentication process: select the brand; the model if you know it; choose the type of leather. Then, the application asks for a series of photographs: exterior (front bag, side bag, exterior label logo, zipper), interior (pockets, labels, ‘Made in’ mention) and, finally, microscopic, where the lens aforementioned magnifies an object up to 260 times and is able to identify the most subtle differences between colors or fabrics.

In less than 30 seconds in the most obvious cases, this little gadget identifies anything that could take a person hours to do, and it will even convince the customer in the worst case of denial.

Vidyuth Srinivasan is the co-founder and CEO of Entrupy. Launched in 2016, the company behind the app aims to put an end to counterfeit luxury handbags and sneakers and already operates in more than 65 countries.

“The way the system works is that from our app, we ask our users to choose the model of the bag in front of them and take a series of photos,” says Srinivasan from New York. “Then they upload those images to our cloud. What’s in that cloud is a set of algorithms for each brand that allows you to authenticate any model that has that brand,” he says.

“We have over 2,000 metrics that we use on each frame to analyze and help the algorithm make the decision. So this set of algorithms at the end makes a report where they say ‘yes’ or ‘no’. Or in other words, “genuine” or “fake”. The algorithm was trained through thousands and thousands of product images. Over time, the more users use the service, the more they can include This results in more data, and with more data, the algorithm is updated and improved.

And then there is the microscope lens. “When we started we didn’t want an external device because as a business you think ‘how many people are going to want a device?’ but then we realized that with the quality that fakes now have and the level at which good fakes are made, we couldn’t just be able to spot the easy fakes, we had to be able to spot the hard ones,” says Srinivasan. “To solve this problem, we needed to be able to create images at a level where you could see huge differences, maybe not to anyone, but to the trained eye of our algorithm.”

Entrupy is part of La Maison des Startups, the startup accelerator of the LVMH group, to which brands such as Louis Vuitton, Fendi and Christian Dior belong, among others.

The CEO explains that companies using Entrupy and customers running their purse through the AI ​​filter can expect secure results due to, first, its high reliability: “We have an accuracy of over 99% to properly differentiate genuine products from counterfeit products”. Srinivasan said.

To counter any discrepancy between 99 and 100%, the algorithm is programmed to give more false negatives (authentic bags that the app marks as “unidentified”) than false positives: “False positives would be when we have a false , but we take it for granted, it’s the worst case scenario for anyone…except for the guy trying to sell you a fake bag, of course,” says Srinivasan. In “unidentified” cases, the human technical team is required to determine the authenticity or not of the product.

Entrupy also provides a guarantee. “Our goal is that there are no counterfeits in the market and that people have more security when buying products,” says Srinivasan. It is for this reason that Entrupy offers a certificate of authentication, a kind of diploma that can already be seen on the pages of second-hand goods sales guides (“Chanel bag authenticated by Entrupy”). “As part of this certificate, we give what we call a financial guarantee”, explains the CEO, which means “we are so sure of the reliability of our own technology that, if we make a mistake, we will pay the money that a customer paid for a counterfeit.

A market full of counterfeits

“To date, our workload is more in expertise and verification than in the purchase of products,” explains the co-founder of Al Paramo Vintage, who notes that since the start of the pandemic in 2020, the number of counterfeits among original handbags has been steadily increasing. Vidyuth Srinivasan agrees: “Yes, there has been an increase in counterfeits as a result of the pandemic, I don’t know what the official reason is, but I would venture to say it’s because, in the world there are more people chasing cash so there are more people getting rid of things and more transactions are happening in general plus there has been an increase in online commerce where it is easier to sneak in counterfeits.”

According to the Organization for Economic Co-operation and Development (OECD), sneakers, along with fashion and luxury items, are among the top three most counterfeited products. According to 2019 data, the international trade volume of counterfeit and pirated goods was estimated at $464 billion, or 2.5% of global trade. Apps and pages that sell second-hand products between individuals and social networks, such as Instagram, are where the supply and demand for these items have increased the most, and where a buyer has the fewest guarantees and of security. While classic and timeless luxury brands, as Sheila Guerrero rightly points out, are among the most counterfeited, criminals are also increasingly focusing on limited editions, latest models or smaller brands.

“Often, luxury brands follow a strategy of limiting certain products,” Guerrero explains. “This often leads to an increase in the second-hand market. In the end, second-hand prices are as standardized as in retail, both in jewelry and handbags, and there are generally no bargains. My only advice for those who want to buy a used product would be this: beware if someone offers you a Chanel for 500 euros, it is most likely a fake.